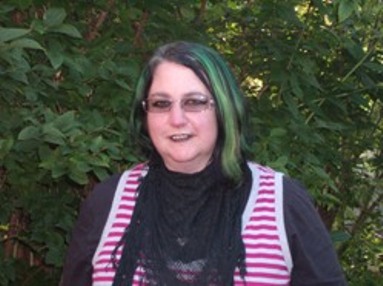 Here we are again, asking the hard-hitting questions other interviewers ignore. In this interview, talented author Nephylim is subjected to a ludicrous but penetrating interrogation. Here are her candid answers:

Definitely not. It’s a… new kind of fish fingers, without the fish. What are you doing, poking about in my freezer, anyway?

…. But none of the tight buggers would buy me a drink. Although the vampire was tapping me for one all night.

3. Fill in the blanks in the following sentence:
Yesterday a house landed on my grandmother when I dancing naked under the full moon, and this prevented me from pole dancing with the munchkins as expected; the lollypop guild and all others involved were very disappointed.

Over and above that it might be easier to say which genres I don’t like to write in. Comedy, although there is a lot of humour in my books (black humour of course), westerns, historical and hard hitting thrillers.

I’m not entirely sure. Some kind of toadstool, I think. It was her own fault, she should have stuck to the sandwiches, but no, she had to root around in the fridge and make her own snack.

I don’t think it will permanently upset her digestive balance, and the purple blotches should fade in time. Not so sure about the ears and the tail.

Why did I let her? Well hell. To see what would happen. Obvs.

Very significantly. I don’t play the banjo, therefore not playing the banjo figures prominently in the writing process of every piece I’ve ever written. Except for the ones with the banjos in them.

Now that was freaky. I pulled up the file, spun the slide bar and immediately arrived at page 44.

We’re almost at the museum when suddenly and unexpectedly, Laurie grabs my arm and pulls me into a narrow alley between two buildings. Before I know what’s happening I’m up against the wall, pinned by his body, and he’s kissing me.

It happens all the time. I’ve learned to filter them out. They usually end up having conversations with the voices in my head about the subtleties of many shades of grey. As long as they don’t move on to black or purple it’s fine but if they do I get sucked into the conversation and no writing gets done, sometimes for hours.

Can you think of a word that adequately describes the colour that lies precisely on the border between black and purple? My favourite so far, comes from a hippy who died in a rather tragic food related incident. At least I think it was food related, all he’ll say is “the ‘shrooms, man, the ‘shrooms.”

I digress. The word he came up with was blurple.

4 tires on a hearse x 5, the number of years smoking takes off your life, = 20 cigarettes. Minus 8, the number of legs on 4 pall bearers = 12 red roses on top of the coffin. Each pall bearer has 2 shoes and 1 nose. Obvious connection. They’re all numbers.

None. The book would probably be an ebook and as I don’t eat computers or kindles I should be fine. Any e-calories could be taken care of afterwards by wiping the hard drive.

By showing them my drawers.

Well, it wasn’t entirely my fault. I mean, I’ve always known I had a screw loose but I had no idea it was going to fall out when I was leaning over the balcony throwing popcorn at the spotty teenagers down below.

It fell straight into the wrench’s popcorn. Before I could do anything she started choking and the screwdriver panicked, running round in circles on the spot. One of the teenagers happened to know the Heimlich maneuver and the screw went shooting onto the stage causing permanent trauma to the back end of the pantomime cow.

The screwdriver, feeling shamed and rejected by the attention the fickle wrench was paying to the teenager, sloped from the theatre where I met him when I ran down the stairs in search of my screw.

Fortunately I persuaded him to go back in, by which time the wrench, thinking she had driven him off forever was sobbing so hard she was getting rusty. Upon seeing the screwdriver she threw himself at him and was shortly thereafter escorted from the premises by a member of security. I believe there may have been talk of bringing charges of gross public indecency.

I never did find my screw.

Well, I’ve been trying to get hold of him to arrange a visit to the library at the Unseen University. It contains every book that has ever been written, some that haven’t yet been written and some that are in the process of writing themselves.

It bends space and time in interesting ways and there are theories there might be whole tribes who have evolved from lost students are living somewhere among the back shelves.

I always keep a banana lying around in ready for the librarian. He’s an orangutan you know. Unfortunate accident. Don’t ask.

The very essence of the question depends upon the number with which it is preceded. This number existed and was related to the question prior to it having been asked.

Given that every opportunity existed, prior to the question being asked, for it to have been numbered differently, and given that the very premise by which the question exists is very much dependent upon the number it is assigned, it is reasonable to surmise that, in fact, the question was very deliberately and thoughtfully numbered.

This of course invalidates the inaccuracy of the numbering and destabilizes the entire premise on which the question was based, in that it must be assumed the question was, in fact, numbered accurately, if un-sequentially, thereby negating my ability to come to any negative realization with regard to its accuracy.

The answer to the question, therefore, is apple, and what I make of it, is pie.

Generally, on seeing the sentence ‘This one is too.’ I would respond. ‘This one is two.’, being conscious of the grammar. However, I would then have to suggest either that the person writing it should have their eyes tested, or drink a little less alcohol.

My favourite would have to be brittle. I mean who doesn’t like brittle. Not only is it great fun saying it, but it’s one of those words that means exactly what it sounds.

No 2 would be ashen. It’s not the name of one of Santa’s reindeer, but it’s close enough and it really should be.

No 3 would be odious. It brings to mind Shakespearean actorrrs with their noses in the air pronouncing dolefully that the most oooodious little man had dared to criticize their splendid rendition of  ‘Mary had a little lamb.’

No 4 would be strict. Given that I gave up trying to be strict with myself years ago, and I am wholly resistant when my children try to be strict with me, the word really has very little meaning in my life. Of course, should I meet someone with a penchant for punishment then ‘strict’ shall most certainly be back on the menu

My least favourite would be toxic, with no 5, because it reminds me of Britney Spears.

(Arran, the ‘real vampire’ from my new book Fallen Angel to be released on 25th January)

“What the hell are you doing here?”

“Get your arse out of here. Now! I’ve got rid of the wraith but there’s a Shade around. Run, you fool, run.”

“Keep your hair on. I ain’t done no running for years.”

“You don’t understand. There’s a Shade. One touch and you’re toast.”

“The only thing bad about my arse is that it’s still here. Will you please come on.”

“Chill out. It’s a lovely night. There’s plenty of time. How bad can this Shade be? Hooooly shit!”

“You’ve seen the Shade then? Dammit, where did he go?”

Nephylim was born into a poor mining family in the South Wales Valleys. Until she was 16, the toilet was at the bottom of the garden and the bath hung on the wall. Her refrigerator was a stone slab in the pantry and there was a black lead fireplace in the kitchen. They look lovely in a museum but aren’t so much fun to clean.

Nephylim has always been a storyteller. As a child, she’d make up stories for her nieces, nephews and cousin and they’d explore the imaginary worlds she created, in play.

Later in life, Nephylim became the storyteller for a re enactment group who traveled widely, giving a taste of life in the Iron Age. As well as having an opportunity to run around hitting people with a sword, she had an opportunity to tell stories of all kinds, sometimes of her own making, to all kinds of people. The criticism was sometimes harsh, especially from the children, but the reward enormous.

In present times, Nephylim lives in a terraced house in the valleys with her son and her two cats. Her daughter has deserted her for the big city, but they’re still close. The part of her that needs to earn money is a lawyer, but the deepest, and most important part of her is a storyteller and artist, and always will be.