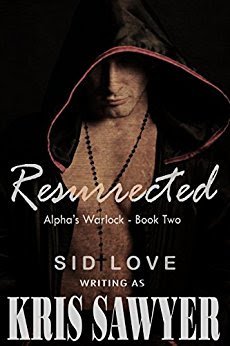 BLURB: Terry has returned from the shadows of death to be with Clyde, but he has more questions than he has answers. The pack is suspicious, and even his lover has doubts about his outlandish story. Desperate to clear his name and learn more about his forgotten past, Terry embarks on a journey of discovery. What he finds will change everything.

Deep in the pine forest, a tormented creature seeks revenge on the pack that has held him captive. More powerful than the werewolves, he wants to destroy. The hybrid hides among them and waits for his chance to pounce. The Alpha senses that his pack is once again on the brink of destruction, but without Clyde’s warlock, he fears all hell is about to break loose.

By the time the next full moon rose over the mountains, Clyde and Terry had settled into a holding pattern that left both of them feeling hurt and confused. Terry grew ever more certain Clyde was drifting away, just as Clyde became convinced Terry was telling the truth. They were completely out of sync, and the depth of their feelings for each other just made things worse. The tension between the two was obvious to every wolf who assembled that evening for the monthly gathering.

“Come forward,” called the Alpha, gesturing to Terry that he be seated at his side. As he approached, Terry could see Luke eyeing him with suspicion and several members of the pack leapt aside as he passed. Clyde moved away to take his place among the other younger males and Terry felt a sudden rush of fear.

“Your return was unexpected,” continued Luke calmly. “It would have been easier for us if you had stayed wherever it was you disappeared to on the night of the last moon. We have buried two of our brothers, members of our pack killed by your hand. Murder requires retribution, and you are only alive because you helped many more than you destroyed.”

“It wasn’t me,” said Terry firmly. “Beatrice found me in the world between the living and the dead and used me to sow dissent among the werewolves. I mean you no harm.”

“You used those words on us before,” said Luke with a thin smile, “and they proved to be false. I’m afraid your promises mean very little to those who still mourn.”

“We can trust him when he’s dead,” growled a voice from the back of the clearing and several others murmured their agreement.

“Banish him,” called another. “Just get him the hell away from us.”

A powerfully built werewolf got to his feet and the gathering fell silent. Loughlan rarely spoke and when he had something to say, the others listened.

“We have survived in these woods for generations,” the big wolf began softly, “by following the old ways and staying hidden from prying human eyes. We have fought our wars, buried our dead and raised our children within the unseen world. This business with the warlock is raising too many questions. The disappearances of Mike and Drake have brought men into the woods, and three timber wolves have already been shot by their hunting parties. We cannot afford to draw any more of this unwanted attention.”

“What would you have us do Loughlan?” asked Luke carefully.

“The men in town need closure,” replied the werewolf, “and I think we should give it to them. They need to find a lone drifter, half out of his mind, who went on a senseless killing rampage before hanging himself. We can put Mike’s watch in Terry’s pack, along with Drake’s wallet and anything else that connects the warlock to the missing men. He’s only been here for a few months so it’s not like anyone really got to know him. They’ll discover his body hanging in the woods and that’ll be the end of their searching.”

Clyde scrambled to his feet and tried to speak but Luke cut him off before he could protest. “Sit down Clyde,” he thundered. “You will not be permitted to give an opinion at this gathering. You brought the warlock into our midst and your lust is why we’re all in this situation. We will decide what to do with Terry, not you.”

REVIEW
This is the second in the Alpha’s Warlock series, which follows the budding relationship between a Warlock (Terry) and a Werewolf (Clyde). As usual the path of their love doesn’t run smooth.
In book #1, Cursed, Terry died and was reborn. Still reeling from the shock, Terry is fighting his own revelations – that everything he thought he knew about himself was a lie – as well as the werewolf pack who want him dead. Clyde is not entirely sure he buys Terry’s explanations and Terry has little to give because, having lost his false memories he’s struggling to find the true ones. “A convenient story”, but sadly true.
Terry heads off to find himself while Clyde remains to persuade the pack not to hunt Terry down and tear him to pieces. Fortunately (oh no, sorry massively unfortunately) a situation arises that takes his mind off missing Terry. A shapeshifter is on the loose and out for blood. If they can’t track him down before the full moon it’s likely he’ll wipe out the whole pack. Except he doesn’t believe in playing fair, so why wait for the moon when he can make the moon come to him?
Terry digs up some information he wished he hadn’t, and picks up a young vampire who insists on being his “protector” after being saved for some witches, who had issues about a cat.
There were moments in the first book, where I felt big chunks of the story were skipped over. There just wasn’t enough space in a novella to explore them properly. This time, I feel that greater care has been taken to unroll things more gradually and logically. There’s just as much, if not more to fit into the pages, indeed there are two entirely separate story threads going on at the same time. However, the author has done a fantastic job of weaving them together and it’s all much more cohesive.
I’m also pleased to note that the preachiness I felt in book one has been toned right down. There were one or two moments when emotion teetered on the edge of preaching but, on the whole it stayed real.
I thoroughly enjoyed this book. There are some who might find it a little too simple. Despite the two storylines there’s no great complexity, and possibly sometimes the writing is naïve, but the characters are engaging, the story is smooth and interesting, and whilst leaving a lot of questions unanswered and our heroes certainly not out of danger, the ending is satisfying and leaves you wanting more without tearing your hair out over a cliff-hanger. The villains are dead and the stage is set for the next bad guy, which might even be Terry himself.

This is a simple little book, unpretentious and sweet. It’s easy to read and the ideal accompaniment to coffee for anyone who likes paranormal/shifter books with a bit of weight and a couple of nice twists. I, for one, hope for quite a few more instalments in this delightful series.

Kris Sawyer is the pseudonym of Sid Love, who has written several books in the M/M Romance genre but with the Alpha’s Warlock series, he intends to introduce a new world of supernatural beings that will intrigue the readers.
Sawyer grew up in one of busiest cities in the world, Mumbai, listening to the excerpts of Indian epics from his father every night. He is a Potter-head and loves a good mystery in the books he reads.
Alpha’s Warlock is Sawyer’s dream project that he’s been working on forever!
Next Post
Previous Post