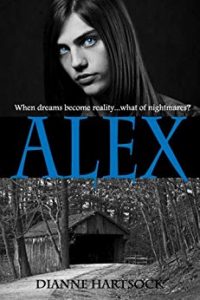 Alex is twenty and confused. He always is. Severely abused as a child, he’s left with scars on his body and even worse scars within his mind. But from this pain he receives his gift of empathy, his ability to see and react to the strong emotions of others. When a serial killer moves into the area and begins to threaten those around him, Alex is compelled by his visions to rescue them. When he can, he helps the police, yet some detectives suspect he’s the cause of the problem, not the solution.

As Alex comes closer to uncovering the killer’s identity, his visions turn to nightmares. He hears the cries of the children, the screams of the tortured. Will the support and love of his friends be enough to get Alex through this summer of terror, or will he lose himself in his dreams and become yet another victim to the killer’s gruesome games?

Alex is very much a departure from my usual reading material. For one thing, it’s not m/m. In fact, it’s one of the very few m/f books I’ve read in a long time, other than specifically to review.

Alex is a horror book, plain and simple. Although there are parts that are sweet, and parts that are funny, the majority of the book has you perched firmly on the edge of your seat, and some pretty terrifying things go down, I can tell you.

Alex is one of my all-time favourite characters and has lingered in my head long after I finished the last page of this book and its sequel, The Shed

Alex is beautiful and beautifully flawed. With only his adoptive sister, Jane, to take care of him, Alex struggles through a life where he is mentally and physically crippled by scars from his past and horrifying visions of someone else’s present. In this book, the someone, or someones are the victims of a horrifying serial killer. Alex witnesses their last moments and enters a desperate race to catch the madman before he kills again.

Eventually, Alex comes into the killer’s sights and from that point on I hardly drew breath. In the first half of the book, as I got to know him, I fell slowly in love with Alex, who is so broken he’s unable to take care of himself and is treated with suspicion by almost everyone except his family and friends because of his strange ways. Nevertheless, he manages to be a strong and independent man who refuses to allow his experiences, past and present, to break him.

When things subtly change and Alex becomes the prey I can feel Jane’s worry every time Alex is alone, waiting for the inevitable. When the climax arrives I’m riveted and I’m sure I didn’t breathe for at least the last chapter or so.

If you don’t like watching someone dissolve into mental chaos, or to read about the gruesome acts of a maddened serial killer, then don’t read this book. However, if you like your horror both psychological and physical what are you waiting for. Go out and get these books as soon as you can.