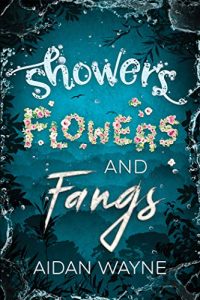 Darren is your average half-human, half-fae trans teenager, busy figuring out his powers and puberty while trying to survive finals. When Vlad, a newly turned vampire, moves in with the witch down the street, he and Darren get off on the wrong foot. Darren is always one to give somebody a second chance, though, and as they become friends, he realizes Vlad is just lonely and struggling with his new powers. That’s something Darren can definitely relate to, and he’s happy to lend his support. But while he coaxes Vlad out of his shell, Darren ends up learning about Vlad’s past… and the danger Vlad is in. Darren only wants to help–help Vlad feel comfortable in his own skin and help him feel safe.

He hadn’t planned on falling in love

When I started reading, I wasn’t sure if I was going to like this book. In fact, I foolishly thought that I wouldn’t. At first glance, the writing seemed simplistic and a little immature. However, as I got into the book, I realised that the writing perfectly suits the story and the characters. This is no steamy erotica, neither is it a cutting edge mystery or on-the-edge-of-your-seat suspense. This is a cute, funny, sweet book about two teenage boys getting to know each other against a backdrop of non-human creatures and situations.

Vlad, the new vampire, and yes he does get offended when people point out his name is literally a cliché, is trying to figure out how to be a vampire all by himself, while Darren is trying to knuckle down and pass his exams while struggling with his menstrual cycle and the natural instincts of a fey in springtime, which for some reason seems to be so much worse this year.

Although it might sound so, and is most certainly humorous in places, this book is neither a comedy, nor a cliché. There are many layers both to the story and the characters and you can read as much or as little into it as you like. Vlad and Darren are two very different characters whose interaction is sometimes clunky and awkward but gets deeper and more fluid with time.

The story meanders and takes its time but is never slow. There is always something going on and it’s often surprising. With Darren learning about the birds and the bees, and Vlad learning how to control his urge to hunt all the animals they have an interesting time, and that’s before the big bad from Vlad’s past turns up and if the boys want to survive they’d best master their powers pretty damn fast.

I loved this book from beginning to end. Although the writing may very well be a little simplistic for some, I loved the way it flowed and how it gave time and space for the characters to grow. All the characters from Vlad and Darren themselves, to Tabitha, Beth, Tiffany and the others are well drawn and have personalities all their own. I particularly like the way that Darren, being fey and therefore able to use the famed fey glamour, can mask his gender and truly be the person on the outside he is on the inside. I loved the amount of attention to detail that the author brought to this, acknowledging that Darren couldn’t physically experience the glamour and sometimes use a binder to feel more like the boy he was and appeared to be. Although it was a little odd to immerse myself into Darren the boy, then to have him start a period, and yes it’s a little jarring at times, but it’s real.

I would very much like to see a sequel and to follow Darren and Vlad as their power grows and they learn more about themselves. That being said there is no cliffhanger and the book is complete in itself. It’s very squarely a young adult and I would recommend it to anyone who is or wants to feel young at heart.