Review. Too Close by R Phoenix 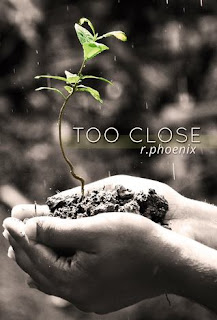 Blurb
Skylar Orion’s life has been complicated ever since his mother abandoned him and his sister Evie. Making ends meet seemed impossible until Tate Chandler took them in — his knight in shining armor who promised to make life about more than just surviving. But Tate is not the man he seemed to be, and even his whispered I love yous and generous gifts do little to soothe the pain he causes. Knowing he can’t give his sister all that she deserves without Tate, Skylar stays with him, relying on bad puns and a worse sense of humor to keep up the charade.
For his sister he will do anything, even if that means acting the responsible adult and going back to his old high school to meet Dexter Weston, the hot math teacher who can make even algebra interesting. Sparks fly between the two of them, but with his dependence on Tate, Skylar isn’t free to follow his heart. He wants what is best for Evie, but can he pass up the chance to find love that heals instead of harms?
Buy Link
https://www.amazon.com/dp/B01MU4RX9U/
Review
4,5 of 5 Stars
I had originally said I wouldn’t have time to read and review before Christmas. Then I read the blurb and thought…ooh that sounds like my kind of book. So I took it and intended to read it after I’d cleared the backlog of what I already had on my list. Then I took a peek. Big mistake. One peek drew me in and I couldn’t put it down until I’d finished
The last book I read was bloodthirsty paranormal/horror, but this couldn’t have been more different. I doubt, if I hadn’t read the other book first, I would have described it as a gentle love story because there is certainly plenty of angst, but that’s the way I perceived it when I read it in any event. It was an easy read and I finished it in a day. Okay, I stayed up until 2am to do so but it still counts.
Technically, the book was tight, with only a few editing errors and a nice, smooth writing style. Although there was plenty of angst, it wasn’t as “in your face” as it could have been and I found myself wanting more, but I’m a big fan of torture and torment so there’s hardly ever enough of either. As I said, although I find this book to be sweet and gentle, others might have more difficulty with some of the abuse, which is mostly mental and emotional.
Skylar is such a sweet boy, doing everything he can, including allowing himself to be slowly unravelled, almost to the point of losing himself, just to keep his sister safe. At eighteen he’s all she has in the world after their mother abandoned them, and he never forgets that, shielding her from the reality of what he has to suffer to protect her.
Skylar’s only refuge is his garden – and his puns *groan* –  and one day he finds a tiny shoot that might be weed. For some reason he can’t bring himself to pull it out so he nurtures and cherishes it, even as his world falls apart around his ears.
Things come to a head when Evie starts to fail maths. After meeting Dexter, the hot maths teacher, Skylar starts to want more from his life. After one ill-timed kiss Skylar’s carefully constructed walls start to crumble and when Evie finally leans the reality of what’s going on, she persuades him to run to Dex.
Things don’t go well and Skylar’s world crashes around him, leaving him as destroyed as his precious garden where only that one little weed survives. Yet, like the weed, Skylar begins to grow under the tender care of Dex and Evie, and like the sapling, which turns out to be a baby birch tree, Skylar gets his new beginning. Not that it all goes entirely smoothly, nothing ever does.
If I have any complaints it that the very end of the book feels very rushed. I appreciate it would take a great deal of time to properly document Skylar’s recovery, because what he’s been through, and the injuries inflicted on his psyche are not something that can be easily healed and resolved. It would have taken time, care and a lot of words to do it service. I appreciate that. However, I think the sudden jumps from one week, to one month, to three months, to a year are too sudden and not developed enough. I did consider taking away a whole star because of this but the book as a whole is so sweet and funny it deserves the 4.5
There are some really bad puns (deliberately I hope) scattered through the book and the chapter headings are humorous, although I’m not entirely sure they all quite fitted. My favourite was “How do you keep warm in a cold room? Go to the corner, it’s always 90% there.”
Meet the Author
R. Phoenix has an unhealthy fascination with contrasts: light and dark, heroes and villains, order and chaos. She believes that love can corrupt and power can redeem. Her muse is a sadomasochistic slave driver who thinks it’s terribly amusing to give her the best ideas when she just got comfortable and warm in bed, and she passes on that torture to her readers. She also tries entirely too hard to be funny, and she mercilessly inflicts her terrible sense of humor upon anyone who speaks to her. She’d love it if you’d say hello!
Website
Twitter
Facebook Page
Facebook Profile
You can enter a Goodreads Book Giveaway for this book until 30 December
https://www.goodreads.com/giveaway/show/215539
Next Post
Previous Post