Rainbow Snippets is a facebook group where members post six sentences of a LGBT work, their own or in promotion of someone else, together with a link to the group page (just click the picture). The link to this post is then posted on the group page.

Today’s snippet is from my new book from Wayward Ink Press due to be released on May 4th. Lab Rat is a new incarnation of a book previously published under he title The Unfairness Of Life and is about a young man who was an unwilling participant in a government experiment in his early teens.

At thirteen, Gabriel was subjected to experimentation designed to awaken latent psychic abilities.

Then one night he meets Laurie, who is the antithesis of everything he’s become: cheerful, optimistic, and comfortable in his own skin.

Laurie pursues Gabriel. But Gabriel no longer believes in love. With a dark past and a history of disastrous relationships, he’s promised himself ‘no more’. Laurie, however, won’t let go, no matter how many obstacles Gabriel places in his way.

When Gabriel starts hearing voices in his head, he realizes they belong to the scientists who experimented on him. Worse, they’re trying to track him down.

Can they outrun the enemy? Can they save Gabriel before either his life or his sanity are forfeit? 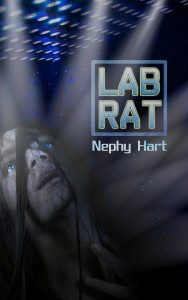