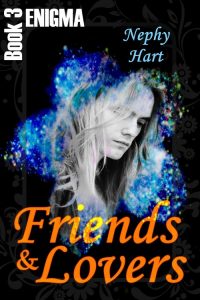 Blurb:  Silver and River are healing, but both are still struggling to reconcile Silver’s life before his time at the Theatre De La Vie, with after. It doesn’t help that Ariel keeps coming around and causing trouble. When he encourages Silver to collect Ben from school he unleashes a can of worms that could easily have had fatal consequences.

I’ve put in a rather longer snippet this week, and I know it’s naughty but the past few weeks have been so intense I wanted to put in something lighter. Here, Ariel has persuaded Silver to meet River’s brother, Ben, from school. Ben is thirteen and the new kid on the block. Image is everything and he’s horrified when Silver and Ariel turn up in full on hot-goth, leather and lace. To say they are striking is to say the sun is warm. Unfortunately, from Ben’s point of view they’re striking in all the wrong ways.

Melissa, by the way, is queen bee and biggest bitch of the group.

“Don’t mind him,” Silver says in his soft voice that makes me a little less nervous. “He gets excited when he’s let off the leash. I’ve been meaning to get him done.”

“Hey you,” Ariel squeals looking up with his puppy dog eyes.

“So,” Melissa says sneakily. “How do you know Ben?”

“And this, for my sins, is a very good friend of mine who has never learned to keep his mouth shut. I’m sorry, Ben. I knew this was a bad idea but you know what Ariel’s like.”

“So, did you meet Ben’s brother when he was working in that house for crazy people?”

“Shut up, Melissa. It wasn’t a house for crazy people. It was….”

“Actually, I did but I’m not so crazy now, although I think he might be.” He nods affectionately to Ariel, who punches him. This is so embarrassing. At least, if Ariel keeps his mouth shut I might get out of it alive. I can explain them away as friends visiting River, from when he was a nurse. They’ll believe that, although I’m going to have to work hard with Melissa. At least I have an excuse not to have a party now.

“I didn’t know you were coming. You gave me a bit of a shock.”

“Yeah, I guess we would. We kind of dressed up for the visit.”

Dressed up? Yeah, that’s one way to put it. They’re definitely dressed up. It’s what they dressed up as that worries me. They look like….

“Are you gay? Is he your boyfriend?”

Melissa again of course. Silver smiles at her and I love the way her eyes go all funny. She’s going daft for him like everyone does.

“Fortunately no, he’s definitely not my boyfriend.”

“You wish,” Ariel grins up at him and Silver affectionately ruffles his hair.

“I’d definitely be crazy if I had to spend any length of time with you.”

Ariel flutters his eyelashes. “I have been known to drive a man crazy, but only when I’m trying.”

“We’ll wait outside the gate.”

Silver is so wonderful but I’m going to kill Ariel.

Enigma III Friends and Lovers is now for sale at most major outlets. Please bear in mind that it is not a stand alone and readers are strongly advised to read the previous two books before this one.