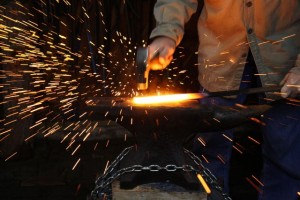 From ‘Blacksmithing ‘ with Bob Rupert http://300mpg.org/blacksmithing-dvds/

Your guess is as good as mine. I live so much inside my head, I wonder who the ‘real’ me is sometimes. Not that I’m complaining. My world is so much nicer than the one out there.

At the moment, my son is not able to attend school so a lot of my time is taken up with juggling tutors and homework. Writing remains a happy release. I am also busy as heck making Christmas presents. After having being made redundant after 28 years as a solicitor, I made the decision not to go back to work, which was just as well, as I now have the time to devote to my son, and my writing. It does, however, mean I’m totally broke so I’m making mostly all my presents this year.

Well, it is and isn’t heavy subject matter. Yes, it’s about past abuse and mental health issues, and set in rather a grim environment, but the characters lift the mood quite a bit, I think. Dory, in particular is very endearing and a lot of fun.

As for the time of its release, I wasn’t given much choice, but I have no problem at all. Yes, everyone is indulging in froth and sweetness, just as they indulge in lots of chocolate and sweets, but I think people need more. There has to be some bitter in the sweet, some coffee with the chocolate, and that’s Shade’s Champion; a bitter sweet, light and serious, funny and heartrending. An evening of chocolate, wine and coffee, and a relief from all that Christmas kitch and twee.

As far as I am aware, my boys live only inside my head. There is, of course, a chance that people I know and have met, contribute to the characters’ make up, but it’s not deliberate.

That’s a hard one. I considered a gay version of Romeo and Juliet, but I get frustrated with all the misunderstandings and mistakes.

My favourite play is Macbeth; I love the witches in particular, and it would be plenty dark for me, but surprisingly, as I don’t really write comedy, I’d love to do Midsummer Night’s Dream. I could have so much fun with Puck.

No, not at all, although I guess Ari really straddles the line. I write the story that comes to me and then decide which category it fits in and which personal should take responsibility. There really isn’t any difference between Nephy and Cheryl, except that Nephy is naughtier.

In practice, Cheryl is taking over more and more. I think there is more freedom in YA writing. No pressure to give the reader romance and no apology for there being no sex. Also teenagers get up to all kinds of things adults don’t. To them, insta love is very real and lasts forever (until the next argument or someone better comes along), bad decisions outnumber good ones, and they jump head first into adventures without thought of consequnces.

I also have some painting projects on the burner, and making Christmas  presents has rekindled by love of sewing, so there might be some embroidery or cross stitch in the near future.

On a personal perspective, I’ll be putting all my energy into my son’s education. He’s very bright but unable to cope socially with school. He’s being tutored at home, which gives me very little time to myself, and I seem to be constantly fighting for what he needs. I’m determined to get him through GCSE’s and into sixth form college.

This is the hardest question you’ve asked.  There are many things I’d like to ask myself. Most of them begin with – Why the hell did you––

A: “That which does not kill us, makes us stronger.” – Friedrich Nietzsche

I know it’s kind of trite, but I think it’s very true. I’ve been involved with re enactment for a long time, and I love to watch the blacksmith work, making swords. I think this ties in with the quote, because every time the sword goes through the fire, the gets beaten with a hammer, it gets stronger. It’s hard to see that when you’re in the middle of the fire, and easy to call the whole thing a load of bull, but when I look back and see the things I’ve been through, I can definitely say that each and every bad experience in my life has taught me something that makes me stronger and more resilient today.

Although, thinking about it in more depth and from the point of view of many of the clients I’ve seen in my career as a family solicitor I think it could do with a tweak. Perhaps – that which does not kill or break me, makes me stronger.