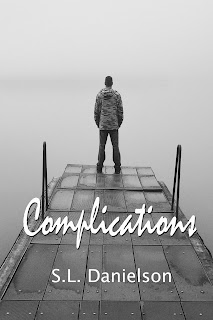 Josh is a family man, a good doctor and a man in love… with his best friend. All is well until Greg discovers how he feels. Sadly, he doesn’t feel the same way.
Heartbroken, Josh finds love elsewhere, with Glenn, a much younger man. They have a whirlwind romance until one flawed decision threatens to tear them apart forever.
With all the complications in his love life, will this doctor find a cure to mend his broken heart?

June, 1999
Dr. Josh Adams and his best friend of ten years, Dr. Greg Marshall, walked side-by-side down the long corridor. Their steps were synced as much as their heights and appearance. Both men were six-foot-three, and sported dark brown hair and full beards. Even their eyes were the same dark espresso brown.
The scent of fresh paint and new carpet radiated from every direction. The new Doctors’ building was nearly complete; only a few finishing details remained. The large brushed nickel halogen sconces lit up the hallway so brightly you could see every detail of the décor without straining. The carpet was an impressive medium shag, done in a plaid pattern of maroon and navy, while the walls were bordered in the same hues along the ceiling line, with a shade of ecru in-between. It was a clean look, tastefully balanced been efficiency and luxury.
Greg touched the new wall, his fingers exploring the texture of it. “Nice place! When will it be finished?”
“Supposedly next week sometime,” Josh answered. “Ah, here we are, number 437.” He produced a set of keys and jutted a bright silver one into the lock of the suite to their left. “Come on; let me show you where I’ll be working, and hopefully you too.”
Greg glared at him. “I told you I don’t want to leave the hospital. How many times must I tell you that?”
Josh shushed him. “You say that now, but you’ll change your mind once you see this place.”
They walked inside the expansive waiting room. There were no chairs as of yet, but a large, circular reception area lay before them. The same colors that decorated the hallway were reflected here, the largest suite on the floor. Josh pulled at Greg’s arm and tugged him along.
“Come back here, the exam rooms are great. I watched them put in some of this stuff myself.”
Greg groaned and followed his friend. How could he not? He’d been best friends with Josh for the past decade and they did everything together. Their lives were almost parallel: same age, both married, two kids each. Even the same concentration in medicine—both general practitioners.
He remembered back to when they weren’t the best of friends. They’d both been assigned to the same hospital out of residency. At that time, Greg found himself sickened by the mere sight of Josh anywhere near him. He found Josh to be overbearing and thought he had a huge ego. Greg vividly recalled how they’d argue constantly and schemed of ways to avoid each other at all costs. They’d fought over every diagnosis until their teaching physician made them draw up a truce between them.
That was over a decade ago. Since then, the two had become practically inseparable and spent many hours together, as did their families. Their wives were good friends as were their children. Josh looked at the new offices and practically drooled. “This place is top-of-the-line everything. Look at this–a lab, right in-house!” He walked into the mid-sized room and saw new microscopes, centrifuges, refrigerators, everything a thriving practice needed to get faster results. “I’m going to love this.” He brushed Greg’s arm. “I’d love it more if you were in on this with me.”
There was more than a hint of sadness to Josh’s voice. For months, he’d been badgering his friend to join him at his new practice. It’d be three doctors: himself, Greg hopefully, and Dr. Bill Snyder. Snyder was a specialist in hematology, hence, the need for such a well-stocked lab.
“How many times do I need to tell you…?”
“And how many times has your lovely wife chastised you for the hours you keep? Even your children are against your hours, isn’t that what you told me just last week?” Josh stated matter-of-factly.
Greg nodded and walked around to the lobby again. He looked out the floor-to-ceiling windows into the large parking lot, at the pond with the walking trail just beyond it. “This place…it’s too much like a park for me. It’s not me.”
Josh groaned. “What is you? All work, no play, and a pissed off family? Do you really want to keep doing that?” He took his friend’s arm sharply. “Listen, if you say no for real, I’ll drop it, but I’ll have to find a third pretty quickly. I want you with me. More important, I think Amber would want you with me.”
Greg looked into his friend’s mutually dark eyes and attempted to gauge his emotions. Ten years of knowing the man had taught him a lot, but especially how to hold onto a dear friend he had no desire to lose. “Josh…I want to, but something just keeps telling me I’d be more useful at the hospital. I love the building, these offices are gorgeous. It’d be ideal for me if that’s what I was after, but I can’t. I’m sorry.”
Josh stared at him for a long moment and even opened his mouth, but no sound or words escaped. He closed it and nodded. “Okay, if you’re sure. Swear on your life sure?”
A laugh escaped Greg’s lips. “Swear on my life sure. I love you for thinking of me like this, to join you in your practice, but I can’t…maybe in a few years I will.”

S. L. (Stephanie) Danielson began writing at the tender age of five. She knew it was her calling from the moment she put pen to paper. In her teens she began writing alternative works and the genre stuck. She created ever more elaborate tales and finally in her early 20’s years began to create works with her new love; male/male romance. She has since written more than 30 works (both solo and collaborations).
Stephanie is classically trained in business, accounting, and HR/training, possessing both an undergrad and graduate degree. She also owned and operated Romance First Publishing where the ultimate goal was to help other unknown, as well as known authors get their start in the publishing world.
Beyond writing, her other hobbies include: painting, gaming, and spending time with her husband and two cherished cats.