This week, I am taking a break from Ariel and giving you a taste of my YA book about Noah, my favourite amnesiac. This is because Memories of Forgotten Love is to be featured in 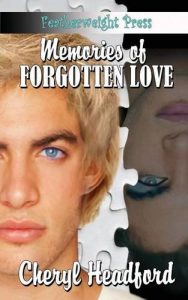 Noah wakes from a coma with no memory of who he is. As his memories return they become stranger and more sinister at every turn. He begins to suspect the accident in which he was injured wasn’t an accident at all, and refuses to accept what everyone is saying that he threw himself off his balcony in a suicide attempt. It just doesn’t feel like something he would do. Struggling to come to terms with the shocking story he gradually uncovers, he’s helped by his friends. Yet, his best friend, Luke is acting strangely, leaving Noah to wonder just what exactly he isn’t telling him.

In this snippet, I’ve gone for something a little less intense, It was worrying difficult to find one 😀

I was startled out of my reverie by an explosion of arms.  I was literally lifted off my feet and soundly kissed by a woman who was as large as Beth was not.

“Noah.  It’s so great to see you.  Bloody hell, boy you been working out or something?  I expected you to be some puny little thing after all this time in hospital.  Obviously they feed you better now than they used to.” She drew back and looked at me appraisingly.  For a moment she frowned and I wondered what she saw.  She was an attractive woman for all her size and I could see where Beth got her looks.  I didn’t remember her but I instantly liked her.

Memories of Forgotten Love is a novella of around 50k words. It’s entered in the first week, which is novella week. My other book with Featherweight Publishing – The Face in the Window – is featured in the second week, which is novel week. I’ll treat you to a taste of Ace next week.You’ll love Ace. Everyone loves Ace.