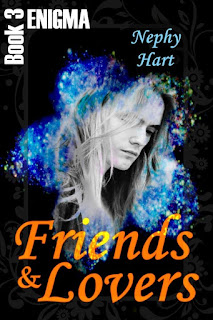 Don’t Forget Books I and II Now FREE on Smashwords
·
“ Friends & Lover” Book 3 of the
Enigma Series
·
Author: Nephy Hart
·
Publisher: Nephy Hart/Flying With Red
Haircrow Productions
·
ISBN: 9781370250882
·
Genre: Gay Fiction, Contemporary
Fiction
·
Available at Smashwords
https://www.smashwords.com/books/view/687265
Tagline:
Problems have a habit of creeping up on you, and when you try to run they’re
never more than one step behind.
Blurb:  Silver and River are healing,
but both are still struggling to reconcile Silver’s life before his time at the
Theatre De La Vie, with after. It doesn’t help that Ariel keeps coming around
and causing trouble. When he encourages Silver to collect Ben from school he
unleashes a can of worms that could easily have had fatal consequences.
Synopsis: Silver is trying hard to
settle down again with Ben and River after the events at the Theatre De La Vie,
but he isn’t the same person anymore and River is having a hard time dealing
with the changes. One of the hardest things he has to cope with is Ariel,
Silver’s new best friend, who makes Silver act like a teenager and causes
trouble wherever he goes. When that trouble touches Ben, it sparks off a chain
reaction that almost ends in tragedy.
In the meantime, Ariel has his own fallout to deal with. After
finally finding someone to whom he might give his heart, he very nearly loses
him by…well by being Ariel.
With his family life in tatters and his best friend lurching from
one disaster to the next, Silver needs to be stronger than he’s ever been. The
problem is he’s not feeling very strong at all. In fact, there are times when
he thinks it would be so much better if he just went back to that place inside
his head where he was safely shut away from the world, and that place is
getting closer all the time.
Other books in the series:

Enigma,
book 1 of Enigma:
“When nurse-in-training River Caulfield improbably finds love with Silver, a
mysterious patient at the Care House where he works, he’s faced with a dilemma
that his career may be threatened because of their attraction. Yet when
dangerous elements from Silver’s past catch up to them both, he realizes there
is much more at stake than his professional dreams. Their very lives may be
forfeit!”
Fighting
the Man, book 2 of Enigma:
“River had always known that living with a freed sex slave, even one as sweet
as Silver, was never going to be easy. It gets a lot harder when his parents
are killed leaving him to care for his young brother. When Social Services get
involved he has a choice to make. Unfortunately, he makes a choice that leaves
the relationship in jeopardy as much as the master who returns to claim his
former pet.”
About the Author
Formerly known
as Nephylim, Nephy Hart was born into a poor but loving mining family in the
United Kingdom, Nephy grew up in the beautiful and history rich South Wales
Valleys, becoming the first in her family to attend university. As a lawyer
practicing Family Law for several years, the profession allowed Nephy to learn
more about human nature at its worst and best moments, and develop empathy and
a view of life not limited by social standing or background.
Tapping into the
heritage of her people that throughout Earth’s ages welcomed the wandering bard
into the hearts of their villages as keepers of lore, Nephy trained as a Druid
and brings the richness of her Celtic past and spiritual training to enrich and
elevate her writing. Since a child Nephy has been fascinated with other worlds,
which exist within and alongside her own and has reveled in creating worlds and
characters for others to enjoy.
Despite lack of
family support, Nephy continued writing privately and eventually found the Gay
Authors website. With the positive response and a warm welcome received, she
found the confidence to pursue her passion to a greater degree. Feeling gay
fiction was a woefully neglected corner of the market where readers were all
too often presented with what amounted to erotica, Nephy strives to write
quality gay fiction where sex and sexuality is not the central premise.
Instead, concentration is given to character and narrative development through
storytelling that goes beyond the physical.
Nephy still
resides in Wales, UK, and enjoys writing, reading, art, and taking part in
medieval reenactments.
Also publishes with:
Wayward Ink Press: “Project X”, “Stranded
Anthology” “Shade’s Champion” “Lab Rat” “Ari”
Cool Dudes Publishing: “Draven’s Gate”
Featherweight Press: “The Face in the Window”, “Memories of Forgotten Love”
For more information, or if you’d like to
contact the author, please visit her websites or write to
Chakira@hotmail.co.uk.
Nephylim
Author
Cheryl
Headford Blogspot
Cheryl
Headford.com
Flying With Red Haircrow Productions
https://flyingwithredhaircrow.com/
Next Post
Previous Post