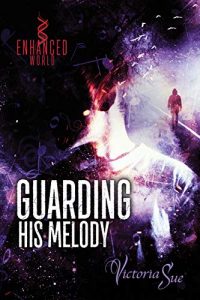 Deaf since childhood, Sebastian Armitage had a promising musical future until his dreams were shattered when he transformed at twelve years old. In a world where enhanced humans are terrorized and imprisoned, his life shrinks around him even more as he suffers the torment of his father’s experimental research to enable him to hear.

Gray Darling—struggling with the scars left by his experience in Afghanistan—agrees to provide short-term personal protection when anonymous threats escalate into assault on those closest to Seb.

As the lines between protection and attraction blur, Gray and Seb can’t ignore the intense feelings drawing them together. But secrets and betrayals might prove deadly, unless Gray is willing to risk it all. And Seb must find the strength to make his own future and sing his own song….

When I started reading, I was a little thrown off because I wasn’t what I’d expected, not that I’m entirely sure what I expected. I was, however, completely blown away and literally sat up all night, until six a.m. to finish in one sitting.

The book is set in an alternate reality where some children become “Enhanced”. Clearly the book is not the first book set in this reality because the concept of “Enhanced” is never fully explained beyond the fact that when a child becomes “Enhanced” they acquire a mark on their face and some kind of enhanced abilities. People are afraid of them and the children are mainly taken away from their parents and kept in facilities or homes, where presumably they’re exploited, although that wasn’t explored in this book.

Families are able to apply to keep their children if they can show they can protect society from them. The child effectively loses all rights and are pretty much owned by their family. That is why Seb is not able to get away from his nightmare.

If you are okay with setting aside a need for explanation and just going with the flow then grab this book and dive in. If, however, you need your t’s crossed and i’s dotted you might want to start with another book that explains the background more fully.

I was immediately drawn to Grey, a pretty grumpy bodyguard who’s not happy with the assignment he’s been given. (This was pretty spooky for me because that’s exactly the way my current work in progress starts, but that’s beside the point) It doesn’t take him long however, to realize this is not just some run-of-the-mill babysitting job, but that Seb is special and desperately needs not only protection but friendship.

From Seb’s point of view, Grey sweeps in and turns his world upside down. He’s never felt so safe, but he’s also confused and the further we get into the story, the more confused he becomes.

I absolutely fell in love with Seb from the moment I met him. He’s a wonderfully complex and unusual character. Not only is he deaf and enhanced but he’s confused, neurotic and deeply unhappy. To see Grey bring him to life is wonderful.

So much is going on and you’re never quite sure who the bad guy is, whether there is a bad guy at all, and what the heck is going to pop up next. It’s an easy read, but a definite edge-of-the-seater.

Grey is all business and efficiency, but he has a kindness that shines through. He’s far less complex a person than Seb, but by no means less of a three-dimensional character. I love how he goes from all business to friend to more and how easy it is for the two of them to fall into step in the end. I particularly like the way Seb took their relationship at the end, which felt very real to me.

Although this is an alternate reality there was a definite sense of solid realism that carried through what might have been a far-fetched plot. The knowledge that this isn’t quite the world we’re used to, with the constant gentle reminders carries a sense of suspense in that even when we think we know what’s happening, we’re aware there are more possibilities than usual.

Toeing the line between reality and sci fi/fantasy, the author does a great job of keeping the story grounded, and the characters, no matter how strange they become, are solid and can be identified with.

All in all, this was a very smooth read, with quirky but relatable characters, a suspenseful and moving story and a stimulating peep into another world. I very rarely give five stars, but this story affected me deeply and I was so invested in the characters I was genuinely gutted when I had to say goodbye, although I was so proud of my little Seb. It was like sending a child off to university for the first time. Well, okay maybe not that invested but still….