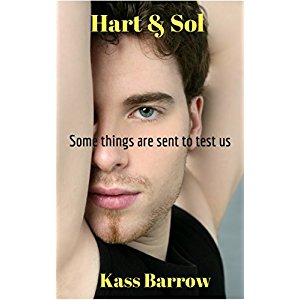 A SLICK ROMP THROUGH A WORLD OF SIN

Hart & Sol are part of a specialist team tasked with eradicating the most elusive threats on their company’s hit list. Top of that list, the target known as Havoc is currently holed up on the Pleasure Planet of Baluvia. He means to destroy the planet and everyone living in that “cesspit for the perverted.” A devious bastard who hides in the shadows, Havoc has only been lured out briefly by an attractive whore called Peter, who has since gone missing.

With Sol’s resemblance to Peter, he’s the obvious choice to go undercover and take his place, in the hope of drawing the target out again. However, with Havoc’s ability to read minds, the plan can only work if Sol undergoes a temporary memory swipe, so even he believes his own cover story.

Hart hates that Sol volunteered for this mission. It’s their first time apart since Sol moved in with him and will be a true test of their relationship. Unaware he has a boyfriend back home, Sol soon shacks up with a whore called Bona, who wastes no time introducing him to the unpleasant realities of life as a sex worker.

With the clock ticking, Hart knows he must stay focused on the end game. He has to track down Havoc and get Sol out of there before Sol’s memory returns and his cover is blown.

Some things are sent to test us…

This is a sneaky little book. It leads you by the hand to strange places, then runs away and leaves you wondering where the hell you are. What you think is true one minute is uncertain the next and when you get to the end you’re left thinking wtf.

I like books that start out one thing and end another and this was one of the better short ones I’ve read. Because of its shortness it doesn’t have time to roll out the plot and develop the characters as thoroughly as I would have liked but don’t be mistaken this is a little gem. It’s small but perfectly formed and I enjoyed every word.

The book is well written with likeable characters and a sense of fatality that drives the story to a conclusion that shocked and impressed me.

If you like your sci fi bite-sized and to be kept guessing right to the end this is the one for you.