REVIEW of Ice on Fire by G R Lyons 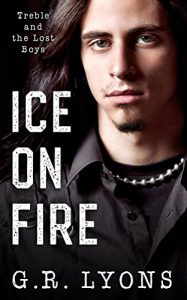 Zac Cinder is on the verge of making his dream come true. His punk rock band, Inferno, might have a shot at an audition for a record deal. Fame and fortune would mean he could finally help his parents. They’d raised eight kids in a loving household while barely scraping by, so Zac is determined to give back inany way he can.

Keeping Inferno together, though, means keeping his biggest secret. His bigoted bandmates would drop him in an instant if they found out Zac was gay.

Then he meets Adrian Frost, and Zac can’t resist the shy man. Adrian gives up everything to be with Zac, but Zac can’t bring himself to do the same. He doesn’t want to lose Adrian, but he can’t give up Inferno, either. Not when he’s so close to realizing his dream.

I am not one to give five-star reviews to every book I like. In my mind. anything above a 3.5 really has to be earned. To get a five star a book has to be truly exceptional and world-changing for me and this book doesn’t quite hit that mark. It comes close, though, so it has definitely earned its 4.5

I loved this book, simple as. Given it’s set in another world, it doesn’t have a sci-fi feel. Yes, there are touches, like the fact that the car drives itself, and the police and criminal justice system are run by private enterprise. There are brief mentions of gods and great events in the past and even two suns. However, these are details. They’re baubles on the Christmas tree, not the tree itself. The tree itself is fresh and natural and beautiful.

I absolutely love the fact that Adrian is so flawed. He’s unable to function at all without medication and even with his daily pills his anxiety is so great he can only just manage to get through the day, and that’s when he doesn’t have much adulting to do. Zac is pretty much his exact opposite – very much the adult, despite his appearance with is long black and red hair and goth persona. Actually, he has two personas – his goth image which is perfect for the rock band he plays with, and a far more sedate, respectable image which he uses when he plays for his fusion string trio. He’s holding down a job to pay his own way through college as well as trying to help support the family he loves.

At first sight, these two do not belong together. In fact, to begin with Adrian is sure Zac is one of the very people who had made his life a complete misery when at school. He starts off terrified of the boy he’s partnered up with for a college project, and even more terrified by Zac’s less-than-subtle flirting. It was pretty cringe-worthy but all in good fun. Some of the things Zac says are outrageous and his puns are out of control but it all works.

The writing is flawless, fluid and cohesive and there are so many things that shouldn’t work but do because they are so well written. There are times when both men skate the edge of becoming caricature, but they never go over that line.

I felt for them both from the very beginning. They both have their crosses to bear – Adrian in his father, and Zac in his pretty appalling friends – but they bear them well and somehow manage to make it work, right up to the point it doesn’t. Even then, Zac looks after Adrian, until Adrian reaches a point where he is able to look after himself. At that point please have tissues ready. I don’t cry easily when it comes to books. It takes a special book to make me sob like a little bitch and this was one. There was no sentimentality but the raw honesty of these two had me bawling.

There are so many gems and lovely touches and so many phrases I’m going to steal for real life.
It’s hard to find anything to complain about in this book, although perhaps I would like to have seen some payback for big bad dad. I’m satisfied that the scuzzy friends were paid back enough, although a case of the pox might be nice.

All in all this was a lovely story of two very different men learning to live together. In Adrian’s case it’s more learning to live. I love Adrian’s progression from someone who is effectively a prisoner in his own mind, to someone who is strong and brave and infinitely generous and caring. I think he had to find himself before he and Zac could actually make it work but the separation was painful.

This is not a piece of fluff. It has a lot of weight. If you like strong characterization, flawed heroes, mild D/s play, lots of quirks, music, laughter and some very weighty issues, including self harm and deteriorating mental health, then this book is most definitely for you. Just keep in mind there is a happy ending for these two, happier than you could have imagined at the start.