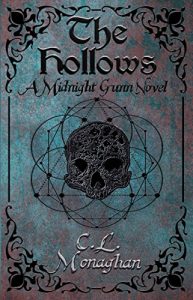 **A unique blend of MURDER, MYSTERY and MAGIC** 1860 never looked so good!

Midnight Gunn is no ordinary detective- born during a solar eclipse as Halley’s Comet blazed a trail through the sky- his supernatural birthright is both a help and a hindrance when solving crimes.
Detective Inspector Arthur Gredge, of Scotland Yard, is the only one who knows Gunn’s secret.
When the body of a young aristocrat is discovered in a backstreet alley, Gredge enlists Gunn’s help in a race to discover the identity of the notorious Spring-heeled Jack- the monster that is terrorising London.
A trail of clues and victims leads them to discover the horrifying truth behind the killing.

The Hollows, encompasses the thrill of a traditional gothic mystery with an extra twist of paranormal, a splash of romance and a hint of horror! Dive into the past and experience the thrill of the hunt as Gunn- Scotland Yard’s best kept secret- chases down a dangerous killer making friends and enemies that will change his life for ever

First, let me say I absolutely loved this book. It’s the kind of book that appeals to anyone from teens to adults, on different levels. First and foremost, it’s a cracking good adventure. Midnight Gunn, a very special young man with an amazing gift, is using said gift to aid the police in Victorian London. A murder leads to a series of bizarre attacks by what appears to be a demon. There are subtexts, however that comment on many issues that are as true today as they were back then, such as poverty, corruption and abuse of power. Midnight is a complex young man and a wonderfully flawed but likeable character.

I have to acknowledge that this is not the best-written book I have read. It breaks many sacred cows of published fiction, such as head hopping and passive voice, with impunity. Personally, I am and always have been, of the opinion that the story, and must be, the driving force. The writing is merely the vehicle in which it is carried, and it doesn’t have to be a limo to get us where the writer wants us to go. This writer is more than good enough to pick up her reader and carry them along on an adventure.

I have to mention the illustration that heads out each chapter. It’s intricate, spooky and darkly beautiful.

As I said right at the start, I love this book. The story is one that can be read and re-read and will keep you engaged from the first to the last page. It’s unique and full of rich detail. The characters are well rounded and interesting to the point of being fascinating. They all have their own individual voices and they all have something to say. I, for one, will be eagerly awaiting the next instalment.