Spelling and Grammar Mistakes I Make 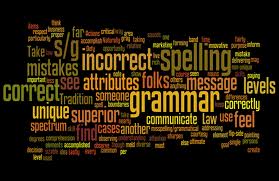 I’ve seen many posts about spelling and grammar, and have learned a lot from them. I thought I’d try one with some things I find tricky. Partly, I think, in the hope some of it will finally stick.

I’ve moved beyond all the your/you’re there/their but maybe a recap to start. If anyone is having trouble remembering when a word should have an apostrophe remember that that an apostrophe indicated missing letters so ask yourself is there anything that can be added to the word. For example their means belonging to them, while they’re means they are – they’re is missing the a.

The past tense of shine is shone not shined.

One of the major things I have to really think about is the whole lay/lie thing. The way I remember is that to lay is something you to something else. I lay the table. I lay down the burden. On the other hand to lie is something you do with yourself. I lie down. I lie back. I lie on the bed.

Of course, it doesn’t make it any easier that the past tense of lie is lay, while the past tense of lay is laid. The rules, however, still apply. I laid the table. I laid down the burden, I lay down, I lay back, I lay on the bed.

The ie rule is generally i before e except after c. Believe, receive, conceive, achieve. Again it doesn’t help that there are exceptions – species, science, seize, weird. It can often help to think of the sound rather than the letter (except with weird which is just…weird.

Other words I struggle with are

Alot (well no, I NEVER do this but I see it done all the time) There is no such word! It”s usually meant to be a lot (many) but it can be a misspelling of allot (give something to someone eg this is my allotted share)

Advice (direction given)   Advise (direction being given) I advise you to get some good advice.

Nausea (what you get) Nauseated (how you feel) When I get nausea I feel nauseated. I never feel nauseous.

No one. I know this seems pretty obvious, but I’ve stressed over whether it’s one word or two.

Queue. I can’t write it without saying in my head cue you ee you ee

There are so many more but I hope this has been entertaining, if not educational